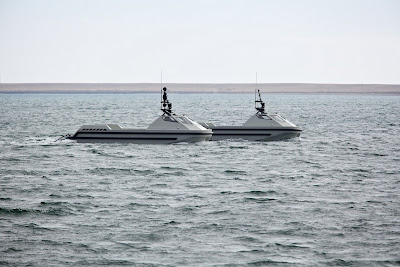 Stefan Nitschke, Bonn (Germany) 29 July 2015 – The Royal Navy is addressing an autonomous minesweeping capability to defeat sea-mines whilst reducing risks to service personnel. ATLAS Elektronik UK (AEUK) has been selected by the UK Ministry of Defence (MoD) to deliver a prototype Unmanned Surface Vessel (USV)-based minesweeping system under the first phase of the Royal Navy’s Mine Countermeasures and Hydrographic Capability (MHC) Sweep Capability project. It is intended to provide Britain’s Navy with an influence minesweeping capability, certainly filling in the gap left by acoustic and magnetic influence sweeps that were retired in 2005. They were described by industry sources as “obsolescent”.
The MoD’s Defence Equipment and Support (DE&S) organisation laid out a requirement for a prime contractor to develop, manufacture, demonstrate, and support a USV-based multi-influence minesweeping capability in June 2014. The new system would be deployed from “Hunt” class mine countermeasures vessels (MCMVs).
On 6 March 2015, DE&S awarded AEUK to develop the USV-based minesweeping system, which, according to the company’s Managing Director Antoni Mazur, is another significant milestone for the company as it continues to expand its business. DE&S selected AEUK ahead of a rival bid from Ultra Electronics that was teaming with THALES UK and ASV. AEUK representatives told NAVAL FORCES at UDT 2015 in Rotterdam that its MHC Sweep Capability bid is based on the ARCIMS (Atlas Remote Capability Integrated Mission Suite) remote MCM system that will be able to detect and counter underwater mine threats, as well as detonating and neutralising them in a controlled manner.
The technology developed by AEUK will eliminate the risk to human life due to undersea mines. Philip Dunne …read more